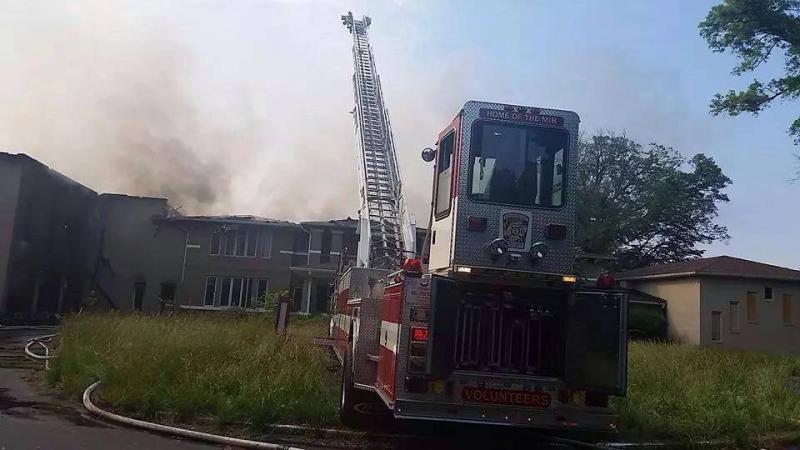 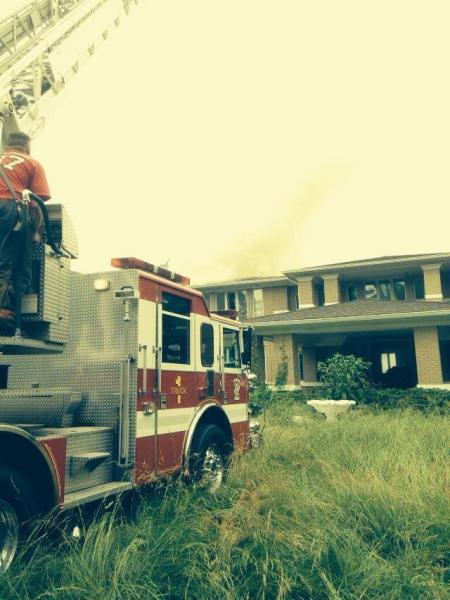 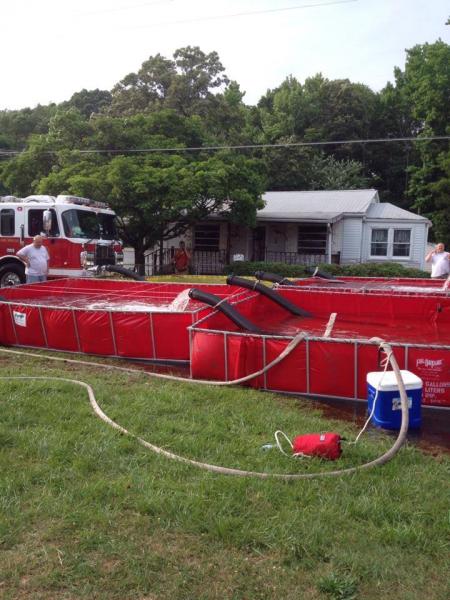 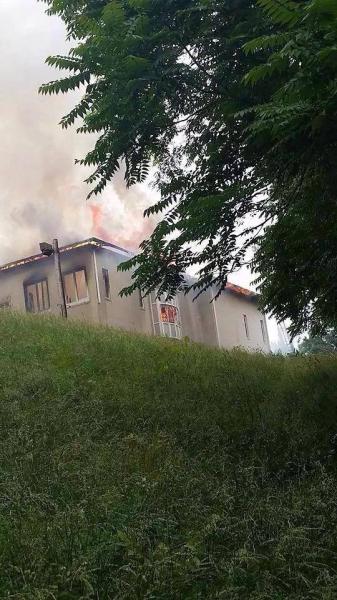 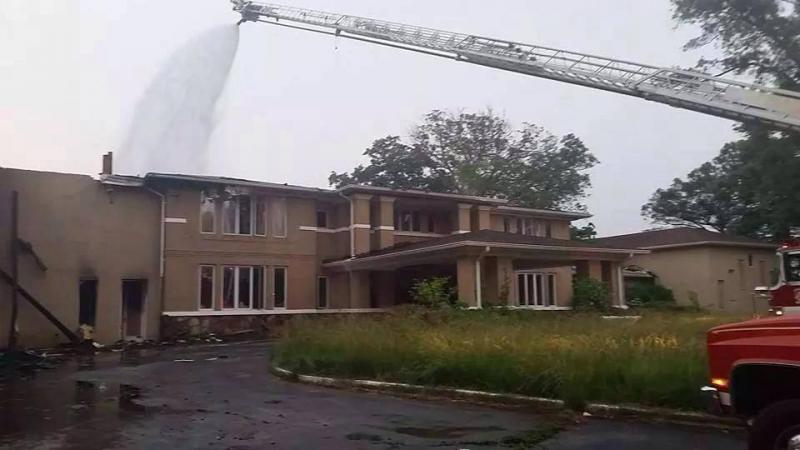 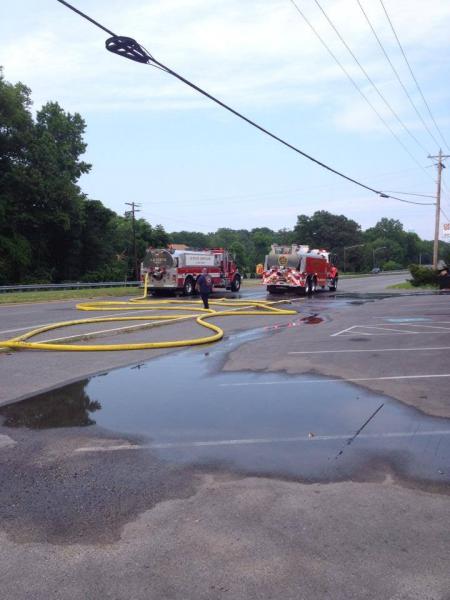 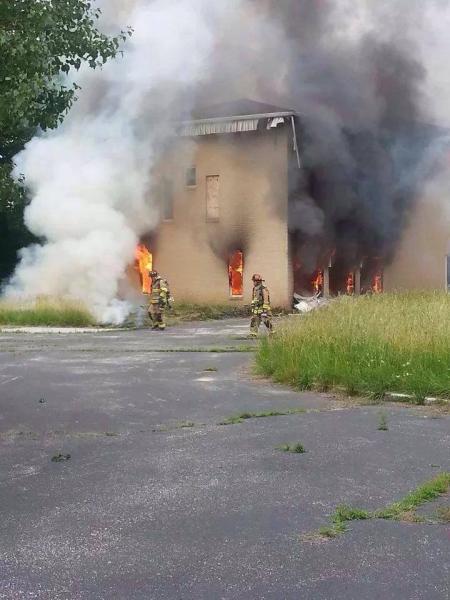 As Engine 12 was wrapping up from the MVC on Port Tobacco Rd, tones rang out for the townhouse fire in Company 3′s area. The engine responded back to the station on Washington Avenue for the ladder truck. The engine crew quickly staffed the truck, and the men in black were off to another one.

Engine company 3 arrived on scene of a 3 story townhouse, middle of the row, with fire showing. Duty 3 established the Sunningdale Place command. When Truck Company 1 arrived, the officer and interior crew began conducting a primary search of the residence, and adjacent townhomes while the truck driver and tillerman began laddering the front and rear of the structure. The aerial ladder was placed in service to check the attic of the structure, as fire rolled up the front of the house and into the soffet. The truck driver went up the aerial as the tillerman continued running ladders, lights, and staging ventilation fans. Power was secured to the home by SMECO, and Truck Company 1 began the extensive overhaul of the home to uncover and remove any burning material and complete extinguishment. Truck 1 remained on scene to for roughly 2 and a half hours before returning to quarters. 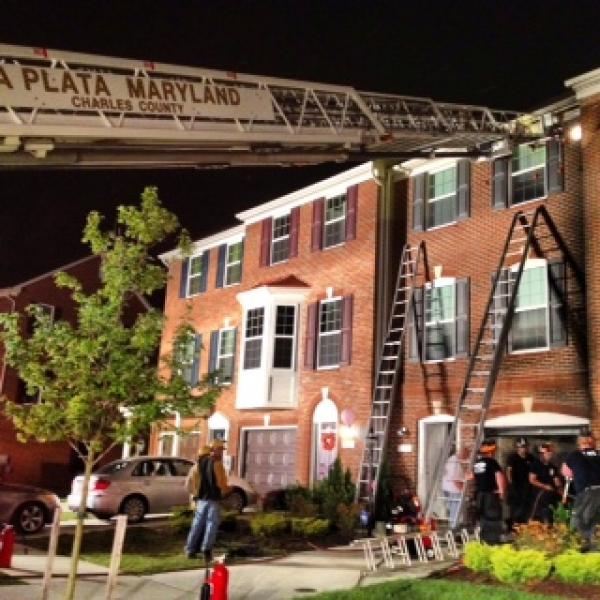 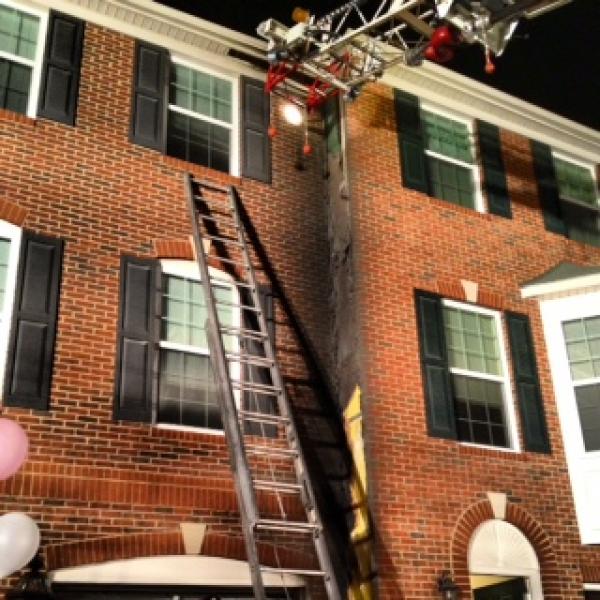 On Sunday June 8th 2014, while Truck 1 was operating at 5200 River’s Edge Pl in Potomac Heights, the La Plata Volunteers along with the fill-in crews from Mechanicsville and Hollywood were alerted to respond for a Automatic Fire Alarm at the Facchina building at 102 Centennial St. Within seconds of dispatch Engine 12, Mechanicsville Engine 24, and Hollywood Engine 73 were on the street with 10 personnel. Engine 12 arrived on scene side A of a four story, Type 2 commercial building, with the alarm sounding and their own hydrant. Engine 24 arrived and nosed into Engine 12′s position, while Engine 73 secured a secondary hydrant across from 105 Centennial St. All three crews went in to investigate and search for any signs of fire. Upon reaching the lower parking level, crews encountered an odor of something burning. Engine 12 notified Communications of the same and requested the assignment for an Odor of Smoke in a Commercial Building. Communications dispatched the assignment and advised units on the scene to switch to Tac-5 for operations. Engine 12 did so and established the “Centennial St Command” at the front of Engine 12, and advised all incoming units with the exception of the first arriving special service to stage in line of approach of Centennial St. Meanwhile, Engine 24 repositioned to the entrance of the lower parking level and pulled a 350′ 1-3/4″ attack line, while Engine 12 hooked up to the standpipe system. Communications then advised that they were recieving calls for an AFA at 105 Centennial St, Command sent Engine 102 to investigate the second alarm, which turned out to be caused by Engine 12 opening up the hydrant to supply the standpipe system at 102 Centennial St. Truck Co. 3 arrived on scene and reported to side A to assisted crews inside with locating the source of the odor. Chief 3B as the North Side Battalion Chief arrived on scene and assumed Command. Shortly thereafter, units inside located the source and determined it to be caused by an burned up elevator motor, and recommended that the assignment be held with 3 Engines and 1 Truck. Command held Engines 12, 24, 73 and Truck Co. 3 at 102 Centennial St and Engine 102 to investigate 105 Centennial St further. Command was terminated and units returned to service at 18:39hours. Many thanks to the crews from Mechanicsville, Hollywood, and Leonardtown Fire Departments for filling in while the Truck was in Potomac Heights. All photos courtesy of Mechanicsville VFD 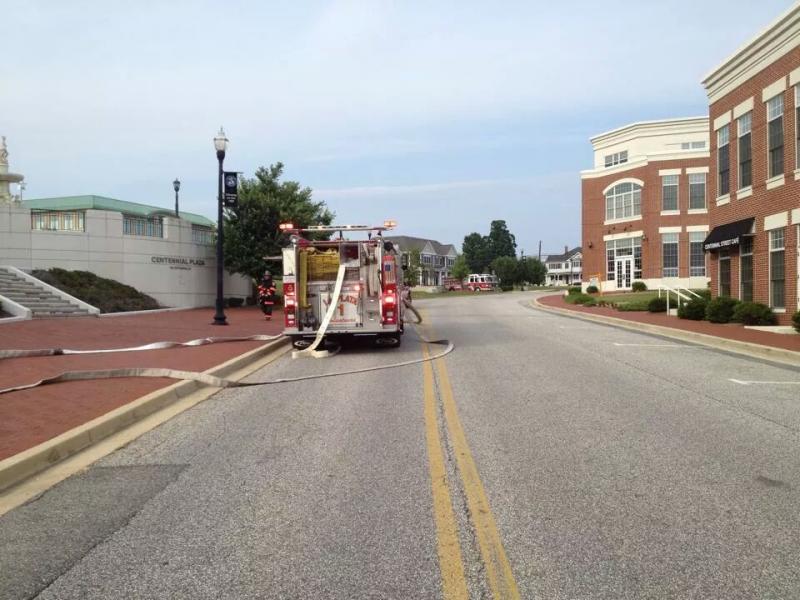 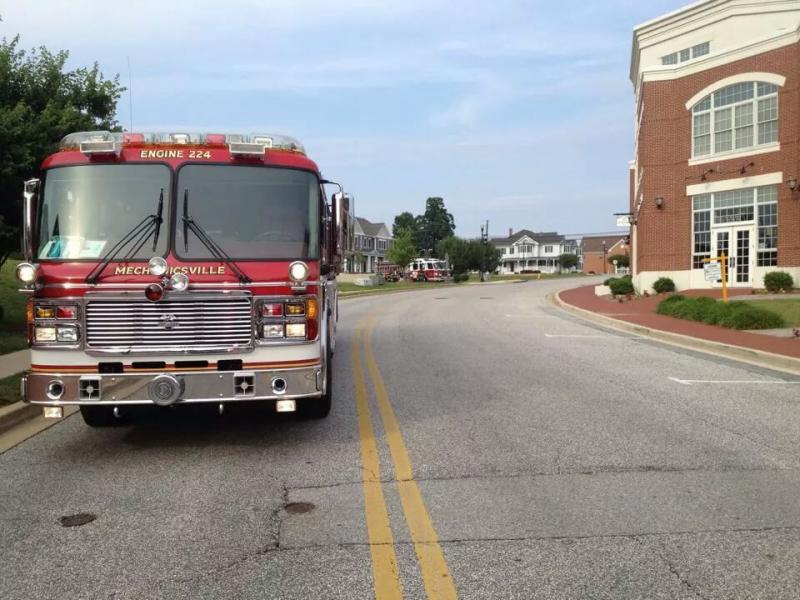 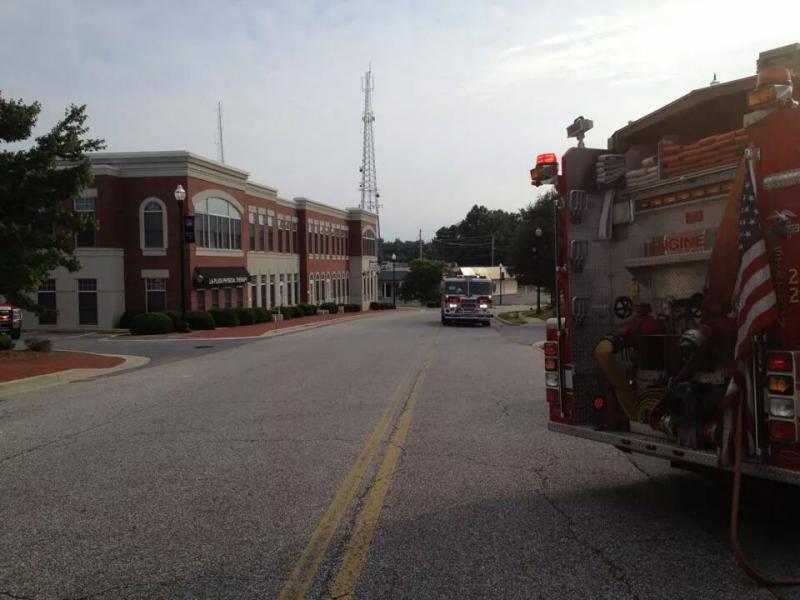 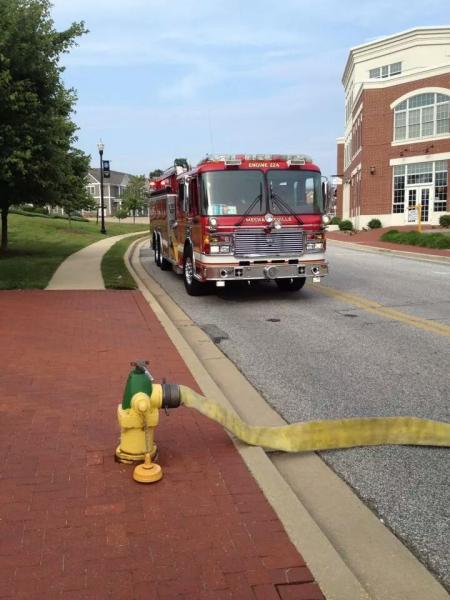 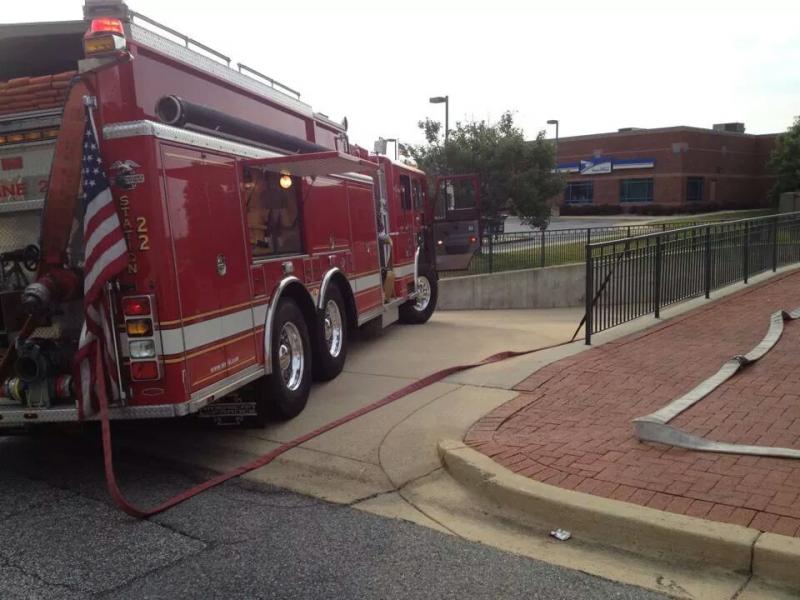 The annual Departmental elections were held June 12, 2014. The following individuals were elected for the 2014-2015 year.

Congratulations to the newly elected officers! We also want to say THANK YOU to our 2013-2014 officers for their dedicated service to the Department.

As the members were completing their nightly station clean up, the station alarm rang for the motor vehicle collision on Port Tobacco Rd. Engine Company 1 and EMS Station 51 due on the call. Engine 12 responded with 6 volunteers. The crew arrived on scene to find a 3 vehicle collision with numerous patients requiring medical care. As the Officer In Charge called for more EMS resources, Engine 12′s crew began triage of the continuously growing number of patients.

As more transport units arrived on the scene, patients were delegated by the Officer In Charge and Engine 12 began assisting EMS crews with packaging patients for transport with neck collars and immobilizing using backboards. A total of 7 patients transported from the scene quickly and efficiently. Engine 12 remained on scene for about an hour before returning to service.

A friendly reminder from the La Plata Volunteers, please don’t text and drive. If you text and drive, you’re 23 times more likely to be involved in an accident. A crash typically happens within an average of three seconds after a driver is distracted.

The La Plata Volunteers are now on Facebook! Like our page as another way to stay connected with your volunteers!